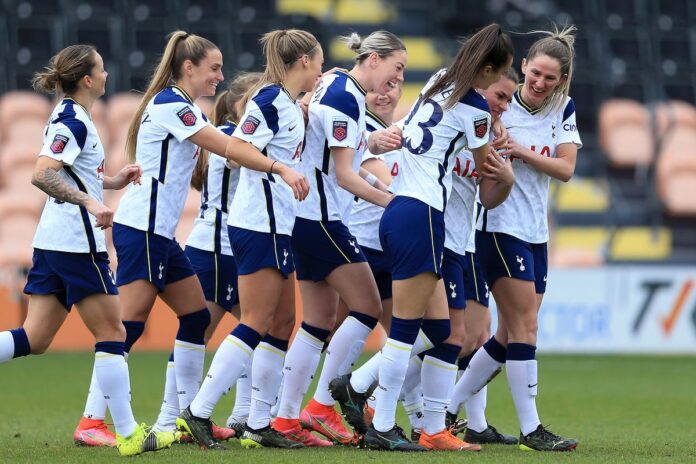 From next season, the British Broadcasting Corporation, the UK’s state broadcaster, and Sky will show 66 Women’s Super League matches across the two networks per season.

The £7m-£8m per season deal will see the BBC broadcast 22 live matches, with a minimum of 18 shown on BBC One or BBC Two, while Sky Sports will provide coverage of up to 44 matches screened across the Main Event, Premier League and Sky Sports football channels.

FERW believes this “landmark” deal will dramatically increase the presence and “visibility” of the women’s game and should be welcomed – a view echoed by England and Manchester City captain Steph Houghton. She was reported as saying it represented an “amazing step forward” and that players were looking forward to showing “the world what an unbelievable league” the WSL is.

“The way this sport has developed in this country over the last few years has been unbelievable,” she added.

“I think this will really push our league to be the best in Europe, if not the world,” she said.

The landmark deal, which will run until 2024, builds on the record-breaking viewing figures for the last Women’s World Cup. According to FIFA, an impressive 1.12 billion viewers tuned into the 2019 tournament, including nearly 30 million in the UK.

In recent years, women’s football has attracted lower viewing figures than the male game, however, this was not always the case. During the First World War, women’s football drew huge crowds. Even after the war, the women’s game continued to be watched by tens of thousands.

One such game on boxing day 1920, between Dick, Kerr Ladies FC from Preston and St Helen’s Ladies was watched by 53,000 spectators, with another 14,000 locked outside the ground trying to get in.

But the success of the women’s game was short-lived.

In December 1921, the FA, which claimed football was unsuitable for women, took the regressive decision to ban them from using the same grounds as their male counterparts.

The ban hobbled women’s game and disappointedly would remain in place for 50 years until 1971.

In the same year, Europe’s UEFA recommended both the women’s and men’s games should all be under the control of the national associations in each country.

According to the BBC, “This move signalled the start of a female football revival, not only in Britain but across Europe and the rest of the world.”

However, it took a further 13 years until the first European Championship was held in Sweden in 1984 and 20 years before the first World Cup took place in China in 1991.

FERW believes that this landmark broadcasting deal with the BBC and Sky is an important milestone for the WSL, however, there are still many challenges that women and girls wanting to play football face on a daily basis.

We would argue that the women’s game is still underfunded, with stars such as Steph Houghton being paid considerably less than their male counterparts.

And the problems are not just limited to the UK. Indeed, in many countries, women and girls face even greater hurdles, including hostile attitudes towards them playing or even going to watch a match.

For example, until 2018, women were not allowed to attend football matches in the Kingdom of Saudi Arabia. Then last year, the Sports Ministry announced plans to launch a women’s league to be played in Riyadh and two other cities. However, this league has yet to materialise, while girls and women continue to be denied many other sporting opportunities accorded to men.

In Iran, the situation is similar. Football is hugely popular in the country and is widely played by the population with a competitive male league, but women have only been permitted to attend football matches as spectators since 2019 and many still face hostility when travelling to and from the sports venues when unaccompanied by men.

So, while FERW welcomes this landmark deal, we recognise that much more needs to be done to break down barriers both in the UK and the rest of the world that women and girls still encounter.