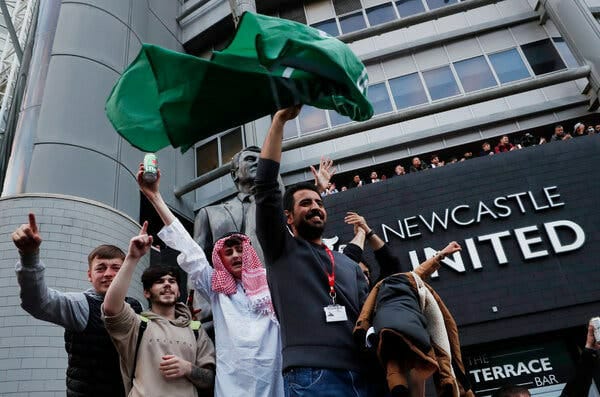 The Government should halt the sale of Newcastle United to the “brutal” regime that rules Saudi Arabia and encourage the Kingdom to raise human rights, says sports think tank.

The think tank, FIFA Ethics and Regulations Watch (FERW), while welcoming the announcement by Riyadh that it will allow the sports network beIN to access its’ population and take action to close the Saudi pirate broadcaster beoutQ, says the regime has still not done enough to warrant ownership of one of the UK’s great football clubs.

In a letter sent to the Secretary of State for Digital, Culture, Media and Sport, Nadine Dorries MP and copied to Richard Masters, Chief Executive of the Premier League, Alistair Thompson, FERW’s UK Campaign Director writes of his concern that “yet again the pursuit of money was being put ahead of all else” and “should the UK Government fail to step in to secure significant commitments to raise human rights in the Kingdom, this would represent a spectacular example of sports washing and make a mockery of the Prime Minister’s boast at the start of this year’s G7, that Britain will remain ‘a force for good’ in the world.”

“We write to you again on the issue of the purchase of Newcastle United by Saudi Arabia, a brutal regime that has been accused of many human rights abuses, including authorising the assassination of Jamal Khashoggi, a Saudi dissident and journalist for The Washington Post, human rights activists facing being jailed with little or no access to fair trials, or judicial rights, the increasing use of online espionage against its’ opponents and their well-documented involvement in the conflict in Yemen, as reported by the BBC and Office of the UN High Commissioner for Human Rights.

“These concerns have been echoed by Amnesty International UK. Felix Jakens, the head of priority campaigns at the campaign group is reported as saying “Saudi Arabia is attempting to use the glamour and prestige of Premier League football as a PR tool to distract from the country’s abysmal human rights record”. He continued: “There’s a name for this – it’s called sports-washing”. This is a process whereby regimes with questionable records on human rights pour money into sport and major events to improve their public image.

“Indeed, Amnesty repeated its’ concerns to you in a letter sent last summer, in which they not only raised the issue of human rights abuses but put forward a number of sensible changes designed to prevent the future takeover of one of the country’s great football clubs by owners that routinely use torture.

“FERW fully share these concerns and have made similar suggestions to the Premier League and English Football League, which have been ignored. We even provided polling on the Fit and Proper Test, that we commissioned, showing a huge public appetite for reform.

“Asked, ‘The owners’ and directors’ test (also known as the “fit and proper person test”) is a test that is applied to directors and prospective directors of English football clubs to ensure those appointed are appropriate people to act as directors of football clubs… Some groups have criticised the current test for not going far enough and allowing directors with close connections to countries or companies with poor environmental and human rights records to own and run football clubs. Following this information, which statement, if any, best describes your views’, 12 per cent agreed that the Premier League and EFL were best placed to carry out the test. While nearly three in ten (30 per cent) believed that the test should be administered by an ‘independent body’, 18 per cent wanted greater transparency of investigation results and just over one in six (17 per cent) said the test was meaningless and should be scrapped, as the Premier League and EFL were only concerned about the amount of money an owner has.”

The Censuswide Poll of over 2,000 (2,011) nationally representative UK adults, including over half (54 per cent) who identified as football or sports fans, found strong support for banning individuals with links to criminal activities, dubious financial records and poor human rights or environmental records.

“We went on to ask, if the owners’ and directors’ test were to be reviewed, what, if anything, do you think should be added, nearly four in ten (38 per cent) said, a ban on owners and directors who have engaged in illegal actions outside of the UK such as the pirating of Premier League matches and other sporting events. An almost identical number (37 per cent) wanted a ban on people who have committed crimes both inside and outside of the UK, while one in three (34 per cent) wanted individuals with a track record of bankruptcy barred and the necessary funds to support the club. While nearly three in ten (29 per cent) wanted a ban on those who ‘damaged the image of football’ and over a quarter (27 per cent) wanted those with links to countries with ‘poor human rights records’ prevented from becoming directors or owners.

“This is why we are disappointed at reports that the Premier League has agreed to the sale of Newcastle United to Saudi Arabia. Yet again the pursuit of money has been put ahead of all else. Should the UK Government fail to step in to secure significant commitments to raise human rights in the Kingdom, this would represent a spectacular example of sports washing and make a mockery of the Prime Minister’s boast at the start of this year’s G7, that Britain will remain ‘a force for good’ in the world. Yes, those who rule Saudi Arabia have made commitments about the pirating of Premier League matches and other sports, however, little has changed on the grounds for ordinary citizens…”

“It is disappointing that Premier League once again has put money ahead of human rights. Agreeing to the sale of a great club like Newcastle United sends out a dog-whistle message to every dictator, brutal regime or murderous government that they and their cash will always be welcome in the UK. As we have previously said, it is time for the Prime Minister to tell Riyadh to clean up its act, including the release of human’s rights campaigners, political detainees and journalists, while ending their involvement in proxy conflicts. If they do not, then the PM should block the sale of Newcastle to Saudi Arabia.”

Decision by Norway NOT to boycott the World Cup is a victory against disinformation and innuendo, by Alex Jones