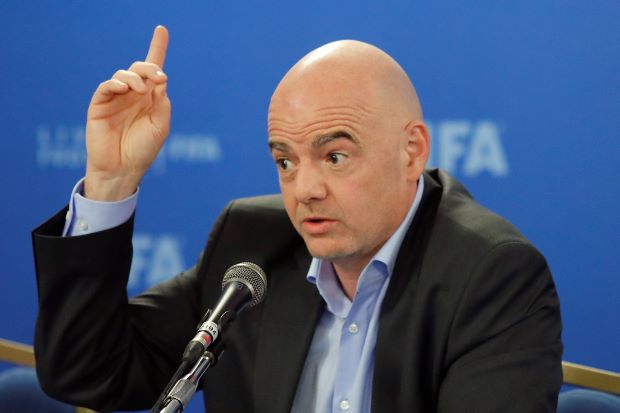 (Reuters) – FIFA President Gianni Infantino on Friday strongly rejected criticism of the global ruling body’s handling of the sexual abuse scandal in Afghanistan soccer from the coach of the country’s women’s team.

Lindsey Kelly had said that when she tried to raise complaints about allegations of a number of her players being abused by officials from the Afghanistan Football Federation (AFF) in early 2018, FIFA had not taken strong enough action.

However, when asked in a news conference if he understood the criticism from Kelly, who he has not met, Infantino bristled.

“I don’t know why this person has criticised. Sexual abuse… It’s something we take very, very seriously,” he said.

“When FIFA was informed about the situation in Afghanistan, we acted immediately. The first thing we did was not to make a PR exercise about how we react. We thought of the interests of these girls and their families and their safety.”

The former president of the AFF, Keramuddin Keram, was banned for life by FIFA last month after its ethics committee found him guilty of abusing his position and sexually abusing female players.

Infantino added that the investigation, which began in December, was ongoing and that FIFA was actively working with United Nations agencies to help the victims, many of whom have been resettled in new countries.

The Swiss-Italian, who was re-elected unopposed as FIFA president last month, said the political situation in the gulf nation made it a much more delicate case to handle.

Having spent the majority of his women’s World Cup closing news conference praising the tournament and the impact of women in the game, Infantino used strong emphasis to reject Kelly’s critique.

“When I am told that some people criticise FIFA, well, you can criticise FIFA for many things and certainly many times you are right to criticise FIFA but we try to do the best especially in sensitive cases like this…,” he said.

“I prefer much more to be active and help one person concretely rather than having 10 headlines saying ‘FIFA president, look how good he is’… But we helped. And I hope these persons who have committed these horrible crimes will be held accountable to justice.”

Infantino’s comments followed a statement by FIFA saying that Kelly’s criticism was “ill-informed”.