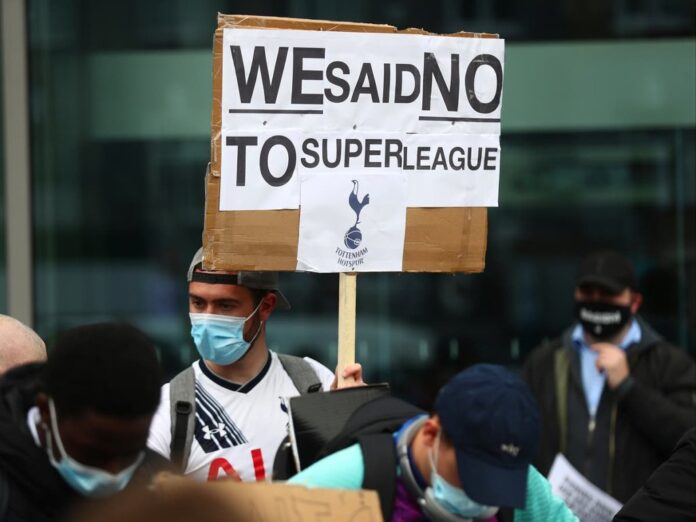 It took two days for the European Super League to collapse. Three years of planning was immediately undone by a nationwide backlash against what UEFA described as nothing more than a ‘cynical project’ by 12 breakaway clubs, including England’s traditional ‘big six’.

The scheme might have seemed a one-off, revolutionary effort to fundamentally alter the structures of the top-flight and beyond, simultaneously dismantling competition and seriously harming the prospects of the other 86 members of the Football League.

Yet the owners of Manchester United and Liverpool, in particular, have been working behind the scenes to change the face of football for a long time. The spin is that it will guarantee their incomes and protect their own clubs’ futures. The reality is that it piggybacks on a century and a half of history and entirely disregards the supporters on whom those clubs rely.

First, came ‘Project Big Picture.’ The big six, plus Everton, Southampton and West Ham, would enjoy a disproportionate level of influence, increasing their power to decide on future rules changes and the share of TV revenues.

It invoked horror in the Football League and was brushed under the carpet at the tail-end of last year.

The levels of supporters’ anguish caused by the confirmation that six English clubs would join the Super League, before they quickly withdrew in the coming days, has not been seen before.

Even the tumult of the 1990s, the introduction of the Premier League and its subsequent re-shuffle five years later did not cause such alarm. They may have limited access and revenues to lower-league clubs, but an element of competition remains. The carrot of reaching the Premier League still dangles before the rest of the football pyramid.

The Super League would have changed everything – but it’s dead. At least for now.

It is hard to believe that six billionaires and their boards failed to foresee the strength of feeling it would provoke among fans, just as it is hard to credit that they will not try again when that feeling ostensibly dies down.

When there is little respect for tradition, heritage or the fabric of the game, there is no reason for these owners to retreat. They cannot ignore the PR disaster that has unfolded, but that does not mean the European Super League will not resurface again in a more palatable guise.

At a pivotal moment in the history of English football – and indeed for the game across Europe – the most realistic and immediate way to prevent this from happening again would be through legislation.

The Premier League are reportedly looking at amending their rules so that any clubs who threaten to break away would face immediate expulsion. In the short term, talk of possible points deductions and fines persists, though they would likely be met with legal challenges.

The UK government also pledged to intervene, if necessary, and could do so by examining the rules surrounding ownership. The ‘fit and proper persons’ test does not go far enough – that is widely enough accepted. The current laws do not afford fans a voice, however, in the way that German football enforces a ’50-1′ rule to ensure supporters are represented at the board level.

Indeed, FERW has previously called for Fan Representatives at the board level at every club to ensure they play a role in decision-making.

Football may be at a crossroads, but it also stands to reason that now is an opportune time for the future of the game to be altered for the better.