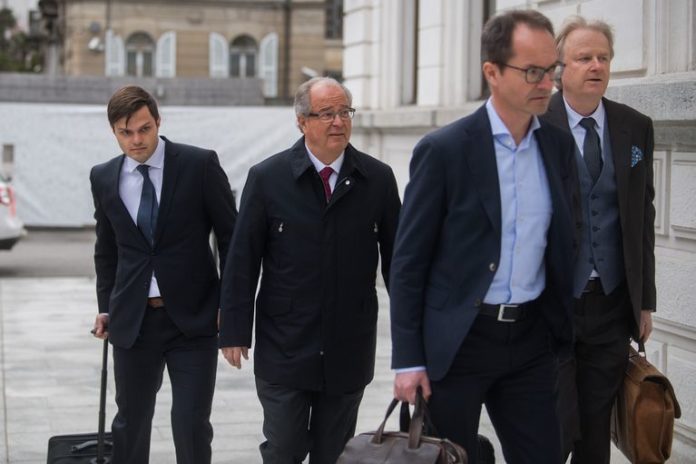 (OCCRP) – The Swiss trial of four former soccer officials over alleged fraud in Germany’s bid to host the 2006 World Cup could be discontinued if a doctor finds the defendants not able to attend the hearings over COVID-19 risks, public broadcaster RTS reported.

FIFA Ex-President Josef Blatter and ex-football professional Günter Netzer were supposed to testify on Thursday but judge Sylvia Frei postponed their testimony to check whether the two suspects who have not appeared in court on Wednesday were really unable to attend.

Although the Bellinzona Court decided to keep the hearings behind closed doors as a sanitary precaution, only two of the four defendants showed up on Wednesday while the other two sent lawyers who argued their clients can’t attend a trial so close to a COVID-19 hotspot.

Bellinzona is close to Italy’s northern Lombardy region where some 12,000 people are suffering from the coronavirus disease that has caused hundreds of fatalities.

The lawyers of the absent suspects asked for the trial to be postponed as the nearby region of Ticino has declared state of emergency.

If, however, the court does not announce a verdict by April 27, the statute of limitations will run out and the case will be dropped.

The five-years-long investigation that lead to the trial was launched after German magazine Der Spiegel in 2015 revealed the scandal involving a 6.7 million euro (US$7.6 million) payment made to FIFA in 2005 by the German soccer federation.

Prosecutors claim that “the accused falsely claimed at a meeting with the supervisory board of the (2006 organizing committee) that the payment to FIFA would be a contribution” toward the tournament’s opening ceremony.

They believe that it instead settled a loan the head of the Cup organizing committee Franz Beckenbauer previously accepted from a former Adidas executive and that the money eventually ended up in the pocket of ex-FIFA official Mohamed bin Hammam from Qatar.

Beckenbauer was not indicted for health reasons but is scheduled to testify on Friday.