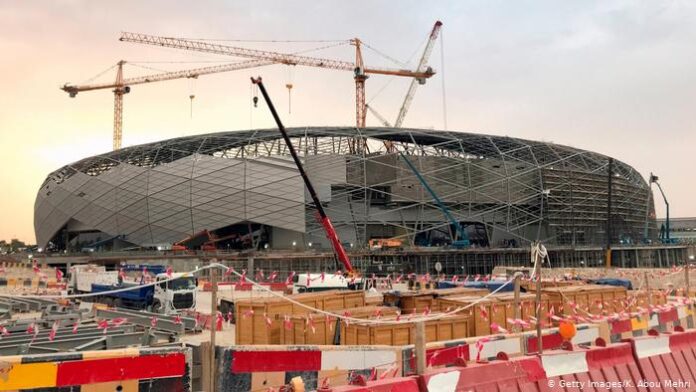 Over recent weeks there have been a series of reports about the football World Cup in Qatar. They paint a Dickensian picture of working conditions and a country unreformed and unresponsive to the criticism from FIFA, NGOs and the media.

In some cases, they are accompanied by calls for a boycott. Setting aside the hypocrisy of those who complain about one Gulf country, while enjoying lucrative sponsorships deals of holidaying in another, ignores the facts.

Let me give you an example. A recent article in a national newspaper claimed that 6,500 migrant workers had died in Qatar over the last decade. This fact was then twisted to imply that these were all linked to the construction of the World Cup venues and associated facilities.

Readers were encouraged to believe that the deaths are inextricably linked to the appalling working conditions migrant workers experience in the Middle East, long hours, high temperatures, and an immigration system that shackles workers to their employers.

But the picture is actually different from the “alt-reality” that has been painted. Let me start with the 6,500 figure. This figure covers a decade and comes from a total cohort of around 1.3 million migrant workers, covering five nations, many of whom have absolutely nothing to do with building the World Cup venues or associated facilities. Even so, this gives an annual mortality rate of 50 per 100,000. This headline figure is lower than the regional average for migrant workers, which, according to the Brussels-based think-tank Euroscope, is around 85 per 100,000.

Drilling further down into these figures, the mortality rate among migrant workers is actually lower than that of Qatari citizens working in similar economic activities.

While another misleading statement, in the same article stated, “…there have been 37 deaths among workers directly linked to the construction of World Cup stadiums”. Each one of these lives lost is a tragedy, however, fatalities in the construction industry are not unique to Qatar, the UAE, KSA, or the MENA region, indeed in the UK, in the financial year 2019/20, the Health and Safety Executive reported on 40 fatal injuries to construction workers and four to members of the public. (https://www.pbctoday.co.uk/news/health-safety-news/hse-workplace-fatality/78512/) This represented a rise in the previous year.

If the same reporting standards were applied, the paper should have reported on the deaths of so many construction workers in the UK. In addition to the direct “on-site” deaths, according to reports, about 8,000 construction workers die each year of cancer, many of whom were exposed to cancer-causing materials. (https://www.roofingtoday.co.uk/hse-construction-statistics-show-almost-half-of-fatalities-were-falls-from-height/)

I make this point, not to belittle the scale of deaths, but to highlight the Pecksniffian hypocrisy of the article. After contacting the paper pointing out these facts, a representative of the paper shot back, “I’m not sure how relevant comparing death rates for different countries is…”, but the whole thrust of the article was to claim how bad working conditions were in the country. So actually death rates of the statistical neighbours are very relevant.

“You quote the regional migrant death rate, but, clearly, factors such as the health system come into play. If the healthcare system in Qatar is better than elsewhere, for example, then this will have an impact on the figures…”

The representative concludes, by accepting that many of the deaths are classified as natural, before adding, “…but which are usually made without an autopsy…”. Of course, the fact that in the UK and most other countries autopsies are relatively rare and most deaths are recorded as natural is ignored. It is possible to see this, as the newspaper saying you can’t trust these foreigners to tell the truth about how people are dying.

This is a disappointing and, frankly, discriminatory view.

The second point that this campaign of misinformation ignores is the significant strides in improving both workers rights and human rights in the country.

A fact recognised by the hugely respected NGO, Amnesty, which says on their website, “Since 2017, the government has passed several pieces of new legislation aimed at benefiting migrant workers, including introducing a law for domestic workers, setting up new labour dispute committees and establishing a workers’ support and insurance fund. It has also ratified two important international human rights treaties, albeit indicating that it will not abide by some of their key obligations, for example on the right for workers to form trade unions. In 2018, Qatar ended the ‘exit permit’ requirement for most workers, meaning those benefiting should now be able to leave the country without their employer’s permission. At the time, domestic workers were excluded from that reform, but at the end of 2019, the exit permit was also abolished for them.

In 2020, Qatar has made further important progress, including ending the No-Objection Certificate requirement, meaning all workers should now be able to change jobs without their employer’s permission and introducing a new mandatory minimum wage in August. (https://www.amnesty.org/en/latest/campaigns/2019/02/reality-check-migrant-workers-rights-with-two-years-to-qatar-2022-world-cup/)

Amnesty goes on to point out that the legislation, while important, must be matched by rigorous enforcement and implementation. This is why the work between the ILO and local authorities is so interesting and why later this year my colleagues will be visiting Qatar as part of a report they are producing about the success or otherwise of these reforms.

During this visit, they will be speaking to workers on the ground to gauge if there has been any change. The results of their work will be published in full and shared with the media and parliamentarians. Until that point, I suggest treating these partial and unsourced stories with a huge pinch of salt and listen instead to what Amnesty and the ILO are saying.