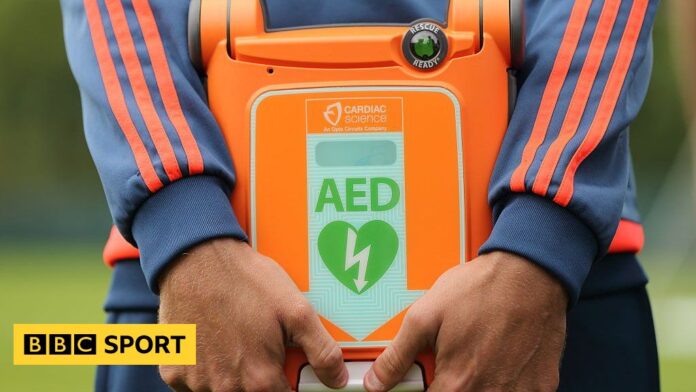 FIFA Ethics & Regulations Watch (FERW) has today criticised the Football Association for repeatedly failing to respond to a call for a nationwide programme that would extend access to defibrillators to all of England’s 42,000 football clubs.

The open letter addressed to the Football Association, Premier League and Professional Footballers Association was organised by former Chelsea and Charlton player, Mickey Ambrose, and FERW as part of their Heartbeat Campaign. It said:

“On Saturday 12th June, our football community was shocked to see the events that unfolded in the Denmark versus Finland match, to our friend and colleague Christian Eriksen. We were all relieved that the near-tragic passing of the Danish footballer was adverted thanks to prompt expert medical intervention, including the availability and deployment of a defibrillator.

“There has been some speculation in the media that Christian may suffer from hypertrophic cardiomyopathy.

“Hypertrophic cardiomyopathy is a significant cause of sudden cardiac death in young people, including well-trained athletes such as footballers.

“One US study concluded that it occurs at a rate of 1:500 in the general adult population and could cause up to 100 deaths per year amongst young athletes. The British Heart Foundation suggest a similar figure here in the UK.

“Whether hypertrophic cardiomyopathy or another cause this incident of cardiac arrest is not isolated. In 2012 Fabrice Muamba collapsed again suffering from a heart attack, whilst none of us will ever forget the sad case of Daniel Yorath, brother of BBC footballer presenter Gabby Logan, who was 15 when he collapsed while playing football with Terry, his father. Our research has found dozens of other similar incidents over recent years.

“In all of these cases, the difference between survival and tragedy was the availability of highly trained medical support and access to a defibrillator. While the provision of both is standard at Premier League and EFL games, these benefits are not enjoyed by most non-league and amateur football clubs. This was recognised by the FA in its partnership with the British Heart Foundation . A brilliant scheme that we applaud, which provided 900 defibrillators to national league clubs and 600 to grassroots ones – but we believe we can do much better and need to turbo-charge and expand this process.”

“There are around 2,000 clubs playing in the National League System across all 11 different tiers, but there are many thousands of others, affiliated to their local County FAs. According to the Sky Football Directory in 2000, there were a staggering 42,000 clubs in total, with some 1.9 million regular participants in England alone. This number was subsequently confirmed by FIFA’s Big Count project which confirmed over 40,000 English clubs, 11,000 more than any other country.

Written before the Premier League’s announcement at the end of June to provide an additional 2,000 defibrillators to football clubs in England, the letter makes the point that at the previous rollout rate around 600 defibrillators provided to grassroots clubs per year, it would take up to 70 years until all clubs have the vital piece of life-saving equipment.

It concluded that the Premier Football League, PFA and the Football Association are in a unique position to take steps to reduce the risks of players incurring serious cardiac events while extending protection to the wider football family within all stadiums, grounds and wherever organised football takes place, before setting out four recommendations, which the letter’s signatories believe must be taken forward by football’s authorities.

To fund the rollout of defibrillators and training to all clubs, the letter proposed a small levy on Premier League transfers for a period of three years.

“It is important that we ensure a uniformity of equipment and quality of care across all Football Clubs, the project would be run by the FA. We are proposing that the Heartbeat Campaign is financed by the Premier League placing a two per cent levy on all Premier League Acquisition Transfers, with the cost being equally split between the buying and selling club. In the 2020 Summer Transfer window, the Premier League spent in excess of £1.24 billion on transfer fees, so a two per cent levy would therefore have raised more than £24.8 million for the project.

“Funding of this nature would be more than adequate to cover the cost of financing a FA Cardiology Unit, under the name of the Heartbeat Campaign, rollout of defibrillators and training of at least two individuals at each club in as little as three years.”

Yet, despite the original letter being sent more than a month ago on Wednesday 14th July, receiving national media attention and a reminder being sent two weeks later on Wednesday 21st July, no response or acknowledgement has been received.

In a final attempt to secure recognition from football’s most powerful bodies of the need to do more, a final reminder was sent to the FA, Premier League, on Monday 23rd August, but there is still no reply .

“Every week 12 young people die from sudden cardiac death, some of whom will be playing sport, watching a match or simply be close to one of the many football pitches around the country. So, it is a scandal that the FA and others are failing to recognise the current piecemeal approach to the provision of AED is wholly inadequate. I believe this is failing to protect players and fans. I believe the solution is to impose a very modest levy on Premier League’s transfer fees to fund a Cardiology Unit at the FA to not only install defibrillators, but to train people on how to use them. We estimate that with adequate funding in as little as three years every English club could have a defibrillator along with a trained club official. Quite frankly, it is nothing short of a scandal that this is not being done, and the FA and others will not even answer letters of those putting forward a way of saving lives. They should hang their heads in shame.”

“I appreciate this is a complex issue and you may disagree with our suggested solution, but not even to reply to our letters and emails is disingenuous and disrespectful. And before anyone tries to claim that the letter was not received, it was also sent to the FA by the media and they provided comment on it. This is why we are so disappointed that the FA, PFA and Premier League are yet again dragging their feet, just like they did over the link between heading the ball and dementia. The sad thing is there are already some amazing programmes out there doing considerable work, but without a serious injection of money it could take generations before the rollout of defibrillators extended to England’s 42,000 clubs.”