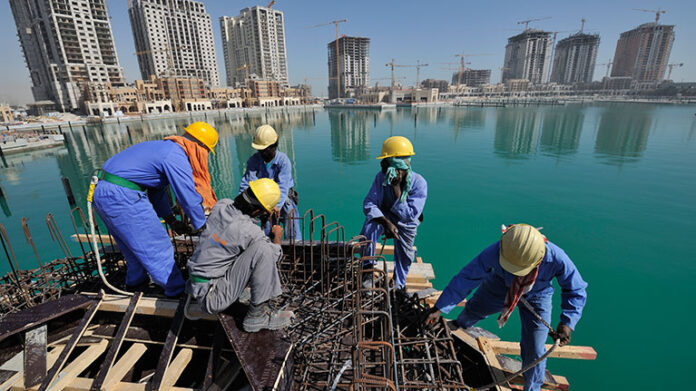 FIFA Ethics and Regulations Watch (FERW) welcomes the publication of today’s “encouraging” report on workers’ rights in Qatar, by the International Labour Organisation, which has made “significant” improvements to workers’ rights since the awarding of the FIFA World Cup.

One is too many: The collection and analysis of data on occupational injuries in Qatar is an in-depth analysis of work-related deaths and injuries in Qatar during 2020. It found that 50 workers lost their lives in 2020 and around 500 were severely injured, with 37,600 suffering mild to moderate injuries out of a total migrant worker population of around 2.4 million.

The figures also attempt to break down the cause of deaths and injuries of the workers, including falls on-site or even road traffic accidents.

The report, while painting a significantly more positive picture of the current situation in Qatar than some have claimed, nonetheless, identifies some gaps in the collection and reporting of work-related deaths and injuries and sets out a series of recommendations, which the UN agency believes will further improve the working environment in the emirate.

“This report, which I would urge all those interested in the World Cup to read, confirms the findings of our recent report on Qatar, our unique survey of workers and our fact-finding mission to Doha. All three confirmed there have been significant improvements to workers’ rights in Qatar since the awarding of the World Cup a decade ago, but there is still scope for further work.

“We were, for example, surprised to hear that across the 25 construction sites under the direct supervision of the World Cup organising committee, there had been just three deaths since work started in 2013. It was also good to hear how the organisers were drawing on UK’s hugely respected Health & Safety Executive for advice and support. But we also heard about gaps in accurate reporting in non-World Cup sites. For example, while the majority of health care for migrant workers is provided by the Red Crescent, which shares data with the health ministry, those working in the oil and gas sector receive private care, with the different categorisation of injuries, creating a clear standard across all sectors will help to close this gap.”

The report from the ILO also confirmed that migrant workers from Bangladesh, India and Nepal were most at risk from injury, something we have previously reported on.

“Many of the ILO findings mirror our own and the follow-up work we are undertaking. For example, when we ask a random sample of workers ‘Is the World Cup helping to improve human rights and labour conditions in Qatar?’, a staggering 95 per cent said “yes” and just one in 20 (5 per cent) said “no”. Other questions about the results of the reforms found a majority saying their working environment and treatment had improved, while two small groups believed that conditions had enhanced for some (53%), or the laws needed further enforcement (16%) and 13% who said they had not felt any benefit from the improvements.

“This was validated by then asking whether they felt the benefits of the reforms. Six in 10 (59 per cent) said “yes”. This left four in 10 believing the legislation had not been implemented ‘effectively’ and more needed to be done. This was confirmed by a second question showing nearly half of those polled believed their treatment had improved, just over 30 per cent saying it stayed the same, and small minority believing it had got worse.”

The FERW report contrasts the scale of the changes in Qatar with China, which will host the Winter Olympics next year. Far from improvements, the FERW is concerned that China has gone backwards in terms of human rights, with a security crackdown in Hong Kong, forced imprisonment and abuse of the Uighur community, the treatment of Tibet, and making threats towards Taiwan.

“The difference between the improvements in Qatar and the worsening situation in China is stark. In one, an existing desire to change has been turbo-charged due to the scrutiny of the international community, in the other, which prevents many NGOs from openly operating within their border, restricts the internet and blocks journalists from freely reporting, the situation for ordinary people has at best stayed the same, or worse, deteriorated.

“This is why, we believe, improving human and worker rights must be hardwired into all future bids, with sanctions up to and including having the event removed for those who fail to comply. We can no longer rely on vague commitments of an improved human rights legacy to secure these prestigious global events.”

FERW also set out a series of recommendations, which FERW believes should be adopted by all sporting and cultural bodies which organise or award major events. They include:

• With regard to the Universal Declaration of Human Rights and the UN Guiding Principles on Business and Human Rights; the United Nations Office on Sport for Development and Peace (UNOSDP) in conjunction with the United Nations Human Rights Council (UNHRC), the Office of the United Nations High Commissioner for Human Rights, the International Labour Organisation (ILO), and in consultation with the sports organisation and federations listed in Appendix D, and the Bureau International des Expositions (BIE), shall establish a declaration setting out universal principles and minimum human rights and labour practices that must be followed by those hosting international sporting and cultural events.
• The Universal Declaration of Human Rights will form a legally binding part of a host of, or a candidate to stage, an international event to which all potential candidates must commit.
• The commission will conduct a global human rights and labour law audit.
• Those states which are not in compliance shall sign a legally binding pledge to implement the declaration and fulfil the requirements of the commission, failure to do so will prevent those countries from bidding to host an international exposition or a sporting event.
• Those that transgress the minimum human rights and labour law standards shall be barred from bidding to host an international sporting event or exposition until such time as the commission considers that sufficient improvements have been made to warrant their admission onto the approved list.
• Where a city, or region, is considered the host, that city will be held liable for the human rights and labour law record of the state in which it resides and will be responsible for the level of compliance with any requirements for reform mandated by the commission.
• The commission will award the host, or candidate, at each assessment point the status of full compliance, partially met, adequate, in breach, or in serious contravention of UN goals and key stage reform targets.
• The commission will appoint an ombudsman to investigate abuses of human rights and any alleged failure to uphold international norms and acceptable labour standards.

• Sanctions shall be imposed against those that have deficiencies in their human and labour rights on a sliding scale with the severity depending upon the egregiousness of the breach.

• The host nation would not receive public praise and plaudits from officials and will be named and shamed.
• Institute a ban on commercial sponsorship and/or prevent the host from receiving the financial benefits of sponsorship from commercial organisations supporting the games, event, or exposition.
• Monies will be held in abeyance until such time as the hosting state has initiated the demanded reforms.

• Remove the games/event/exposition from the country in question and relocate them to a state, or states, that comply with human rights standards and have sufficient labour laws.

“If we are to deliver on Nelson Mandela’s famous statement that sport has the power to change the world, we must welcome the changes in Qatar, while encouraging them to go further. At the same time, we must revisit the bidding process for future mega sporting and cultural event and make sure that improvements to the lives of each country’s citizenry are an integral part of a bid legacy.”

Pro World Cup event to be held in Germany