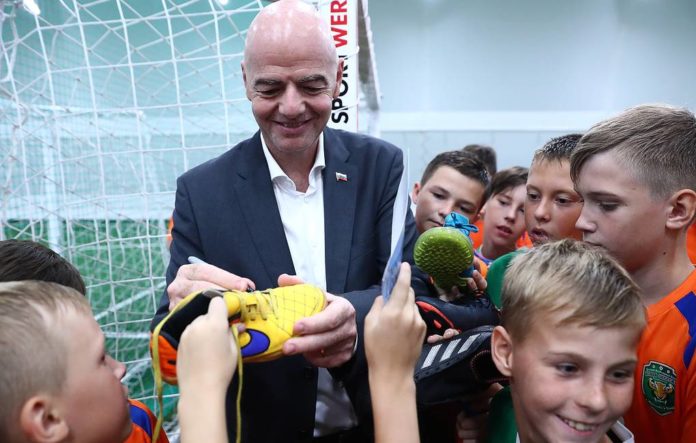 (TASS) – FIFA President Gianni Infantino is ready to invest some $5 million in the development of children’s sports and the construction of sports facilities for children in the Russian Far Eastern city of Vladivostok, Primorsky Region Governor Oleg Kozhemyako told TASS on Thursday.

After paying a visit to the sports school, they walked to the Dynamo stadium, which is a home stadium to local football club Luch from the Football National League (FNL). Infantino stated in particular that the stadium needs to be refurbished since the place “is very special.”

“You could make here a football-only stadium,” Infantino said.

“I completely agree [with Infantino’s proposal],” Kozhemyako said. “We talked to Igor Levitin, who oversees sports issues in the administration, telling him that it would be a good idea to make a 15,000-seat capacity stadium with children’s sports school and other facilities.”

“According to my information, Infantino is ready to invest about $5 million in children’s sports, the construction of sites for children’s sports and the arena,” the governor said. “This is why his [Infantino’s] arrival [to the EEF] is a significant event.”

Dynamo stadium in Vladivostok was built in 1957 and currently boasts a 10,000-seat capacity. The stadium is mostly used for hosting matches of local football club Luch.

FIFA President Gianni Infantino also met with Russian President Vladimir Putin on Wednesday and told him in particular about his plans to open a football school with the Far Eastern Federal University in Vladivostok.

The Eastern Economic Forum, established in 2015, is held annually in Vladivostok. It serves as a platform for debating key issues concerning the world economy, regional integration, and the development of new industrial and technological sectors, as well as global challenges facing Russia and other nations.

In 2018, 220 agreements, contracts, memorandums and protocols worth over 3 trillion rubles ($45 bln) were signed at last year’s EEF, which was attended by over 6,000 delegates from 60 states.

This year’s forum is taking place on September 4-6. TASS news agency is the event’s general information partner, the official photo hosting agency and moderator of the presentation zone focusing on the Russian Far East’s innovation opportunities.