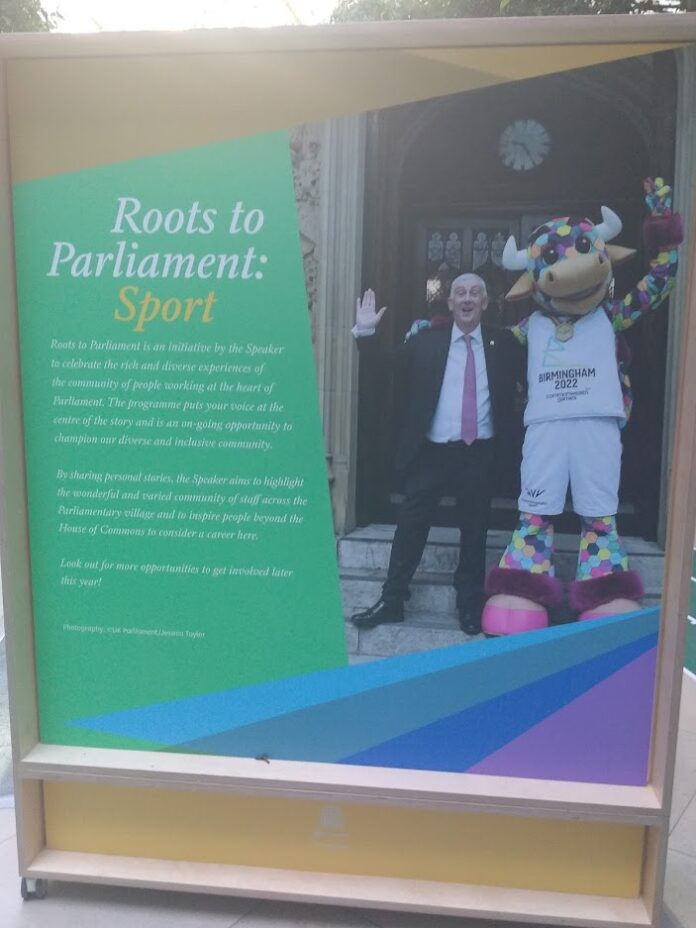 All focus right now in Westminster is centred on the Conservative Party’s leadership contest. It’s a decision that will decide the next Prime Minister of the United Kingdom. So it’s not surprising that a display, currently on show in Portcullis House on the Parliamentary Estate and put together on the initiative of the Speaker of the House of Commons, has received little attention.

This is a shame, because the exhibition acts as a useful prompt for anyone looking at sport (and even more narrowly, football within sport), to help consider the values it fosters and the building blocks it offers both to individuals and to wider groups.

The display is set out in the voices of people who work on the estate. Three of the individuals talk about their own experiences in football. Gosia mentions the friends she’s made, and the different rewards of both participating and also seeing family play. Philippe looks back at growing up in Africa; where there were no refs, games could go on for hours and people ran the rules by consensus. These days the sport still encourages him to keep fit. Gary meanwhile had trials for a big club when young and treasures those memories today.

Taken together, these displays encourage us to take a step back and consider the broader rewards sport brings. Some arise through cooperation; others through self-motivation; others by personal trial against others or against personal bests. There is significant overlap here across sports even if the nature of a given game may change its focus.

Football teaches us teamwork – the basics of not trying to hog the glory, but passing the ball to win. Even simply of turning up for practice and to play when everyone expects you to. Working together literally in order to achieve an end goal.

Football also encourages self-discipline. To keep within the rules of fairness and fair play, showing respect for your opponents. To maintain your fitness so you can make that critical sprint when your energy levels are drained, but which also sustains your general health as a by-product.

So football builds character. But football also brings communities together. Whether it’s the town named on the scarf, or the friends brought together on the pitch and maybe socialising afterwards, it unites. Sometimes it can build where people have little experience in cooperation, have few role models, come from broken backgrounds and have a selfish approach to life, one based on taking rather than sharing. Team sports like football can be a ready tool for community pioneers to help fix this, adding a sense of commonality, sharing, and an objective.

Of course, there are many other aspects beyond these. The Speaker, Sir Lyndsay Hoyle MP, has done a useful service in encouraging people to reflect on the gains that all sports bring. It is our own part as a campaign group to take this a step further. Mindful of what football can deliver if managed professionally and wisely, we need conversely to also assess the weak points and vulnerabilities – the risks from poor planning, mismanagement, bad practice, muddled thinking, and even corruption.

Reviewing those concerns is where we will be putting our own renewed efforts into over the next twelve months as we take our activities forward.