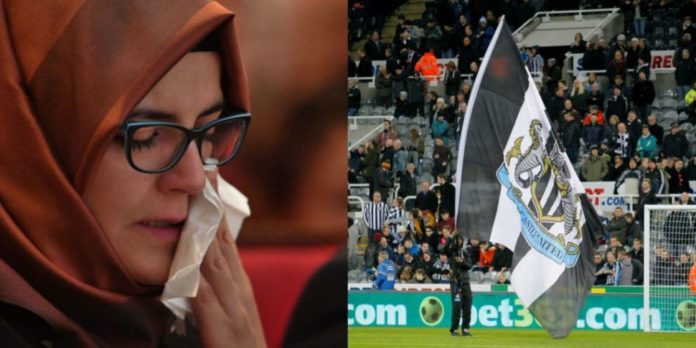 An open letter from Jamal Khashoggi’s fiancée to Newcastle United fans should heap pressure on Premier League chiefs to reject the prospective purchase of the Club by a consortium that is 80-per-cent-owned by the Saudi Public Investment Fund, but it will not.

The letter from Hatice Cengiz, the fiancée of murdered Washington Post journalist Jamal Khashoggi, was written after news that the Premier League are reportedly on the brink of agreeing to the £300m takeover.

Written to Newcastle fans, it urges them to “slam shut the door on this offensive deal” from the Kingdom of Saudi Arabia and echoes the concerns of several human rights groups, including Amnesty International and this organisation over the prospective new owner.

In the letter, she says: “I am Hatice Cengiz, the fiancée of the late Jamal Khashoggi. Jamal was murdered in the Consulate of Saudi Arabia in Istanbul on 2 October 2018 in truly gruesome circumstances while I was waiting for him outside to return to me.

“We were planning to get married only a few days later. I write to you at a crucial time in the history of your famous football club.

“Crown Prince Mohammed bin Salman, the absolute ruler of Saudi Arabia, is aiming to take over your club by offering a huge sum of money.

“I know that many of you are tempted by his offer to get out of the dire situation that has crippled your club for so many years. But the Crown Prince is accused of ordering Jamal’s murder. All credible investigations have shown his responsibility.

“He has not been put on trial in his own country as he controls it with an iron fist. My plea to you is to think whether accepting Mohammed bin Salman’s offer is really the right way out of the despair for your club and City. How can it be when your club will be controlled by someone who should be tried for murder, as we would rightly expect for anyone accused of killing a loved one.

“You as the loyal fans do have a big say in this. I implore you all to unite to protect your beloved club and city. They are making this move not with your best interests in mind, but solely to serve themselves.

It concludes: “Now is the moment to stand tall together for the game, your club, your city and your country in order to slam shut the door on this offensive deal.”

Under normal circumstances, such a high-profile letter along with the well-documented issue of the Kingdom’s human rights record would have heaped pressure on the Premier League to act. However, these are outside of the current scope of the Premier League’s fit and proper test, something, we believe, needs to be urgently revisited.

There are other problems which the Premier League can consider such as the catalogue of allegations over the state-sanctioned illegal streaming of matches. This is currently the subject of a $1-billion dispute, filed with the World Trade Organisation, and is an issue that the Premier League has very recently raised internationally.

In February this year, they wrote to the US Trade Representative (USTR) complaining about the unsuccessful attempts to take legal action against the pirate network beoutQ through the Saudi legal system and blasted the ‘failure to take action’ by the Saudi government.

“Despite repeated complaints by beIN and other rights holders, Saudi Arabia has never brought a criminal action against beoutQ, or its Saudi facilitators,” they said.

These are strong words and, having already failed the test on human rights, will the Premier League fail the test on the alleged illegal streaming of its’ own football matches. At the very least, it would seem sensible for any decision on the sale of Newcastle to the Saudi-dominated consortium to be put off until either the WTO rules one way or the other, or the beIN claim is settled. To do anything else merely reinforces the idea that in football, money will always trump morals.